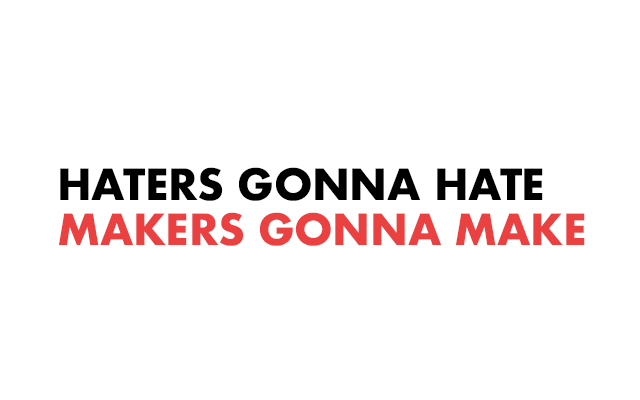 Make Your Haters Your Motivators in Life.

Ever got Worried or Annoyed about HATERS? Then Read This ?

I Personally Consider Haters & Opponents as good things in the path of success. Becoz they make it so much easier to succeed.

It’s pretty safe to say that at least 75% of the people on the planet are haters. That’s sad for them but good for us.

Because haters will never get anywhere or make anything of their lives. If you’re consumed by hate it’s impossible to do good things. You can’t achieve your dreams or help others when you’re wallowing in hate all day.

What that means is YOU only have to compete with 25% of the world’s population for whatever it is you want to accomplish in life.

How fucking great is that? ?

You’re not competing with everyone. Most people disqualify themselves from even entering the race. They’re an afterthought. The field is already narrowed down for you. It’s like you get to skip the first few brackets of the tournament and get right to the Final Four.

Some people would say I’m underestimating it by putting the number of haters at 75%. Others have said it’s 90-99%.

If you read any Facebook Post, Trending Tweets or YouTube comments you’d probably lean toward the higher end of the spectrum. It’s a cesspool of hatred, bigotry, and racism.

And Especially when it comes to India the Number is on the Higher Side. Most People here are busy doing chutiyapa all over the internet and Indians are Famous for getting offended very easily.

On second thought, don’t spend your valuable time reading all the horseshit. It’s too disgusting. Do Something Productive instead.

The point is that people sit around confronting, brawling, proving each other wrong and typing fucking comments all day!

They ain’t chasing dreams. They’re not competing for your spot. They’re at home rotting in the basement, pounding the keyboard and spewing venom.

So whatever it is you want to do in life, thank the haters for increasing your chances of success. There are fewer people competing for that top spot than you think.

What about if you’ve got your own slew of haters? It’s not as easy to ignore them as it is to ignore the haters shit talking other people.

Firstly, congratulate yourself. You can judge your success by the number of haters you have.

If you have an opinion, are original, real, fearless, take risks and put yourself out there you will have haters. They only chase the one carrying the guts.

Always keep this thought in mind:

The key is how you respond to them and how you let them affect you.

We’re all human so at some point, the haters will get you down when they push the right buttons.

If they hit on something you have doubts or are insecure about you’ll get angry or bummed out and you may want to respond, or even start reigning blows down upon them.

it’s not worth it. If you let it go you get over it and they crawl back under their rock.

There have been times when I let someone get to me because they said something that I thought might be true. Maybe they’re right, maybe I do suck at XYZ.

But then I said, “fuck ‘em.” I can’t let other people control my life and my emotions. That’d be weak, pathetic bullshit.

Plus, I kind of like when someone tells me I suck at, can’t do something or get anywhere. I will do my best to ignore them & prove them wrong in the future. It’s fuel for the fire.

I find people getting depressed because of haters and even getting distracted from the path of success. I can only imagine that thousands of people found or will find a way to bash them because of it.

Sadly, that’s the world we live in.

Now, I’m sure that there will be occasions in the future where I let haters affect me in some way and I will either respond or quietly steam about it for a few hours.

You can call me a hypocrite. And you’d be right.

Or you can do me a favor and remind me of what I wrote here.

I’m definitely not saying I’m perfect or that you should be either.

I’m just saying that together the #TurnCoatNation can rise above the haters, do great things, and live lives worth talking about.

For reducing the amount of competition, and for Inspiring & motivating the rest of us to do more than we’d be capable of without their words to fan our flames.

They’re just making it that much easier for the rest us to succeed.✌

To All My Biggest Fan’s Out there Here is a Reason to Hate Me more – 21 and running a Global Ad Agency. But The Plan is not to become a WizKid, But the WizDad.

For Our Lovable Haters:

If you know someone who might like this post would you mind hitting one of the buttons below and sharing it with them? I appreciate and thank you in advance.