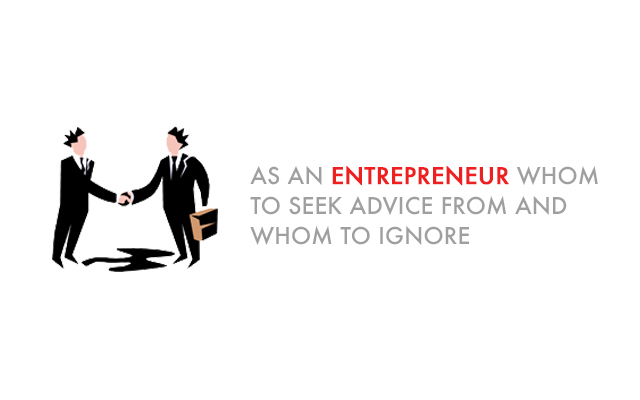 If you’re wondering While Starting up whom to seek advice from and whom to ignore this is an article which can help.

﻿Starting a business is one of the most challenging things you can do. And one of the hardest parts is that most people won’t understand why you’re working so hard. Some of these people may even resent you for starting a business. They’ll try to drag you down emotionally, tell you your business idea is silly and impossible or even try to sabotage your efforts. You may think that explaining yourself to these people will make things better. But in most cases, explanations won’t help.

The best strategy for dealing with negative people you come up against when starting a business is to avoid them completely.

Nowadays Startups are picking up in India, and so is the ecosystem. Many people now want to be part of startups, be it as an entrepreneur, investor or employee, and this definitely is a good sign. An entrepreneur, during his or her startup journey, meets, interacts with and seeks advice from lots of such people. The right advice from the right people can be extremely helpful, but at the same time, people who don’t have enough startup exposure can mislead entrepreneurs.

From my experience – founding two companies & failing in one – I’ve created some categories of such people. I warn you not to spend much time with these folks.

Research supports this view: A study in the Journal Of Social & Personal Relationships found that ignoring negative people increased the ignorer’s intelligence and productivity. The researchers examined 120 participants who had been asked to either talk with or ignore people who, in turn, had been instructed to either be friendly or offensive to the participants.

Avoiding negative people, then, seems critical to staying smart and productive while starting a business. If you want your startup to be successful, make sure you avoid the following seven toxic people:

Fake Mentors or whom I call snakes – These are people who try to make you believe you need them to be successful. They basically give you biased advices to misguide you.

So, be wary of negative people who try to make you feel like you can’t do something on your own. If someone starts withholding support from you unless you do what’s demanded, ditch that person. Cut the cord and find someone else who will support you and your business efforts without any ulterior motives or strings attached.

Fake Investors – Many people nowadays call themselves angel investors but do not actually actively invest. They may or may not be part of an angel group. They will reach out to you, give you half-baked Gyan, and ask you to send them all kinds of documents. Mostly, they don’t have any intention of investing in your startup, and can easily waste your 3-4 months.

Not-so-genuine entrepreneurs – These are people who started ventures but didn’t apply themselves, did not execute much and closed their startups after a few months. These people have lots of general gyan to offer, without much substance on the topic of actual execution. Interacting with these people can mislead you.

Wantrepreneurs – There is no problem with being a wannabe. The problem only begins when one intentionally or unintentionally misleads people with one’s own half-baked Gyan. You find these people in all kinds of startup events, but they actually don’t have the courage to start up or the intention to. They generally give Gyan about what works and what doesn’t, what is scalable and what isn’t, etc.

Toxic Clients/ Cutsomers – Yes, You heard that right if you’re in India at some point you’ll start facing toxic people as clients/ customers. These people will encourage you at first but later on, will take your services and don’t pay in time. and most of them usually have a superiority complex, egoistic and passive aggressive behaviour they mostly want you to satisfy their ego and make them feel superior just because they are the clients/ customers. And if you’re in India there is 99.99999% chance you have to follow up for your payments with these people every time. So It is better to avoid such people who will distract you and disturb you from achieving your milestones. Remember Money isn’t everything if you’re working with passion and want to go on a long run look for young-thinking like-minded people who are humble, honest and supportive.

Start-up enthusiasts – Just to give them a category, we can call rest of the misguiding people startup enthusiasts. They do not have any practical knowledge about startups or doing business in India. Generally, these people are experienced professionals and hold senior positions in IT or at consulting companies. Some are associated with startup related organizations/groups, or investment films. They try to show off their startup knowledge, which they have acquired either from their batchmates who are doing startups or from startup blogs or from startup events they have attended.

This brings me to the point. How should we separate sound from noise? Whom should we trust and seek advice from? I have a rule of thumb for this; you should only take advice from people who have been there, done or are doing that – people who are actually getting their hands dirty, executing rather than just talking. Some of them are:

Entrepreneurs who have built a company, or are in the process of doing so – They understand what it takes to build a business in India. They can share insights about running a business, and can also introduce you to the right people and processes.

Entrepreneurs turned investors or those who invest actively – Generally, these people give quality, relevant advice. They know the problems startups actually face and can help you with refining business models, and give you execution tips.

Genuinely failed entrepreneurs – These are people who have put significant effort into their startups, given them their all, have come out with different solutions, pivoted, and have actually done most things right, but somehow couldn’t sustain their startup. These guys will also have some useful insights to share with you.

Last but not the least:

Intuition – Because no one knows you better than you do. You followed your intuition and took the startup plunge. You have to continue doing that for the rest of your life now.

I have written this post in the context of startups, but this applies to every scenario in life. For example, just as a project manager at an MNC can not give you advice on startups, a successful entrepreneur might not give you relevant advice on relationships. So be very selective when it comes to taking advice, as not every connection is a good connection.